Wondering who is this doppelganger of Yogi Adityanath?

Accordingly a face that has gained visibility alongside Samajwadi Party (SP) chief akhilesh yadav is Uttar Pradesh Chief Minister yogi Adityanath's look alike. Meanwhile he has been traversing with Akhilesh during his campaigns for the ongoing Lok Sabha elections. He is suresh Thakur and Thakur can be seen on the dais of Akhilesh during his rallies and also travels with him. However, he does not give any speeches, only waves when Akhilesh engages with the crowd. 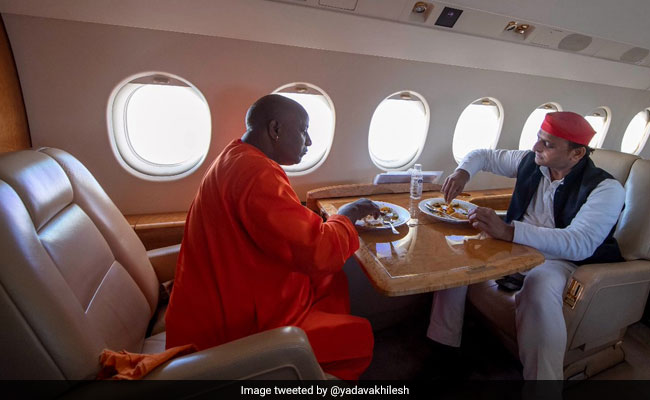 Furthermore Thakur, a resident of Lucknow in the state of Uttar Pradesh wanted to contest against union minister rajnath singh from Lucknow. Meanwhile he had filed his nomination from Moulik Adhikar Party, but it was rejected by the Election Commission. Accordingly reports suggest that in 2017, Thakur was sacked from a government job and in protest against his losing the job, he shaved his head.

Moreover in a picture shares on Akhilesh's Twitter handle, the SP chief can be seen sharing a meal with suresh on an aircraft. Taking a dig at Adityanath, he said, "Jab unhone hamaare jaane ke baad mukhyamantri aavaas ko ganga jal se dhoya tha, tab hamne bhe tay kar liya tha ki ham unko puri khilaenge! (When he washed the house of the CM with the holy water of river ganga after our departure, we had also decided that we would feed him puris!)”