CBN's meet with Mamata Banerjee is a whiff of worry!

Andhra Pradesh Chief Minister Chandrababu Naidu is on a "Stop BJP" mission even before the elections ended. But exit polls predicted a comfortable victory for the BJP and his meeting with Mamata was a hint of concern. Mr. Naidu said to the media that he will discuss politics before his visit to kolkata. But there was no word from him after the meeting. 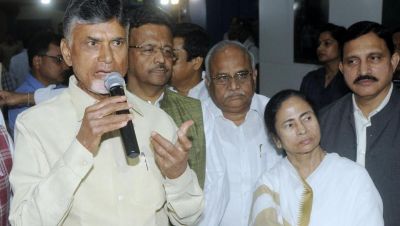 The exit polls also confirmed that YSR Jaganmohan Reddy will win 15 of the 25 seats and CBN will just get 10. But, both CBN and mamata banerjee have called the exit polls as rubbish and Mamata even called it as "Gossip".

CBN also said the EC should establish transparency and accountability, and questioned why it is not conducting 50 per cent counting of the slips from VVPAT (Voter-Verified Paper Audit Trail machines). The EVM controversy began since 2017 assembly elections in UP.