Bengaluru on political crisis with multiple protests by BJP & Congress

As per report protests took centre stage in Bengaluru even as the political crisis in the state spilled over to mumbai’s Renaissance Hotel and even the Supreme Court in the national capital. Meanwhile as a result of the protests, Leader of Opposition in the Rajya Sabha and Congress leader Ghulam Nabi Azad along with other Congress leaders were detained by police for protesting outside the raj Bhavan where BS Yeddyurappa was just about to arrive along with other state BJP leaders. 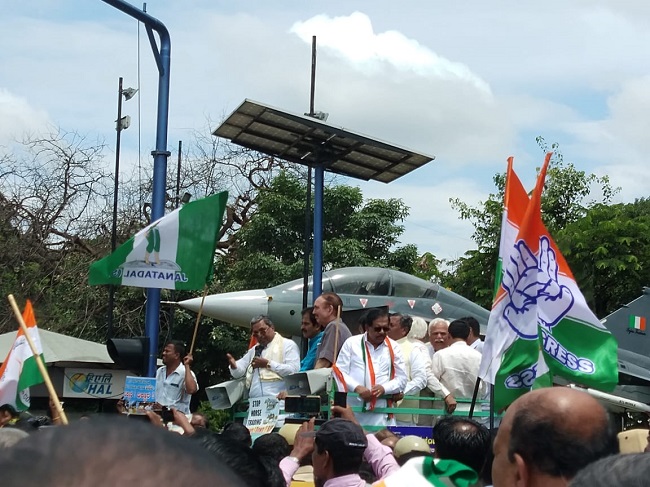 Furthermore Azad and other high profile leaders including former Chief Minister Siddaramaiah and ex-Prime Minister HD Deve Gowda had joined protesters in central Bengaluru at a stone’s throw away distance from the Vidhana Soudha where the BJP was holding protests.

Moreover MLAs and MLCs of the BJP led by Yeddyurappa convened at the Gandhi statue inside the Assembly premises demanding the resignation of Chief Minister HD Kumaraswamy. Furthermore their claimed being that the government had lost its majority in the House with the resignation of 13 rebel MLAs.