The Oxford dictionary which is the most popular and most used across the corners of the world, has now retorted and responded clearing fake information that was getting shared via Congress President rahul Gandhi. rahul Gandhi was offered a clear clarification by the Oxford Dictionary on a word that was used by him. 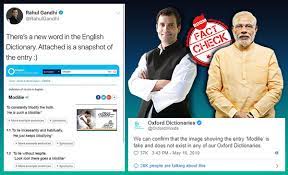 During his recent speech campaign, rahul Gandhi had said that the Oxford Dictionary has added a new word called Modilie to its collection of words and that the word was coined after the numerous lies spoken by Indian Prime Minister Narendra modi, and that it meant modifying the truth and was to shame the Prime Minister.

However in a timely manner, Oxford dictionary gave a much needed clarification, as they clarified that the word Modilie getting included in their list is fake that it is not a part of their Oxford Dictionaries. It was understood that what rahul had shared was a fake and photo shopped image of Oxford entry.